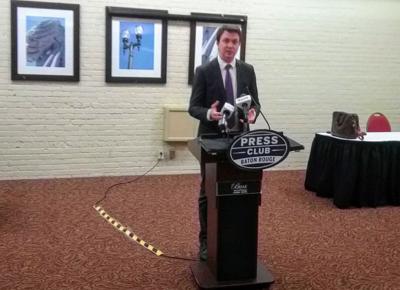 By David Jacobs | The Center Square

The old expression that “all politics is local,” if it ever was true, certainly no longer holds true today, an LSU expert said Monday.

“These nationalizing trends have very much come to Louisiana politics,” said Joshua Darr, an assistant professor of political communication at LSU.

In Louisiana’s race for governor, the top two Republican candidates competed to show how much they support President Donald Trump. Darr, who spoke at Monday’s meeting of the Baton Rouge Press Club, said a similar phenomenon is happening across the country as national politics drives voter decisions at even the local level.

Split-ticket voting, once a common feature of American politics seldom seen in other democracies, is increasingly rare. In 2016, no state majority supported one party’s candidate for president while electing a different party’s candidate to the U.S. Senate, the first time that’s happened in 100 years, Darr said.

Darr’s research indicates the struggles of local print media are helping to feed the nationalization trend. In communities with a vibrant local newspaper, the daily paper tends to drive the local news cycle, he said.

But when local newspapers close, media consumers are more likely to fill the gap with national news, of which there are more sources than ever, he says.

“If you lose a local news source, people are going to turn to national news,” Darr said. “It’s going to have stronger party cues, and it’s going to make you think about party as you step into the ballot box.”

Though his research didn’t directly address what happens when a local newspaper stays open but cuts staff and local content, he said a weaker version of the same dynamic likely follows. Audiences also seem to prefer national news when given the choice, he added.

*repuiblished with permission of the Center Square